Each year, tens of thousands of female dogs and cats die from breast cancer, ovarian cancer, uterine infections, and difficult pregnancies.
Most people think that veterinarians recommend spaying and neutering solely to help the pet overpopulation crisis. While this is certainly a major reason to spay, there are several heath reasons for doing it as well.
Spaying can safely be performed on animals as young as 8 weeks of age. Animals in heat and pregnant animals can be spayed, although the risk of complication is a little higher. Spaying your cat or dog before they have their first heat cycle, which is usually at 6 to 7 months of age, will decrease their chances of developing breast cancer to almost zero.Spaying or neutering reduces the risk of your pet dying of uterine or ovarian cancer. Spaying eliminates the chance of your pet developing a potentially life-threatening infection of the uterus called pyometra.Spaying or neutering eliminates the mood swings and undesirable behavior that female cats and dogs display during their heat cycle, such as messy spotting, pacing, crying and trying to escape.

Spaying or neutering helps decrease the number of animals that are euthanized at shelters.

Provided by the Society for the Prevention of Cruelty to Animals. 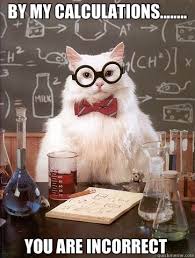 Myths about spaying and neutering:

Myth No. 1 My kids need to experience the miracle of birth.Fact Most animals deliver in the middle of the night by themselves. Kids can experience the birthing process by watching a video instead of at the expense of the family pet.

Myth No. 2 My pet is a purebred and her personality is so good that I want her to have puppies.

Fact One of of every four pets brought to shelters are purebreds and most do not find homes. Just because your pet is special, there are no guarantees that her offspring will be anything like her. You have the father’s genes to consider as well.

Myth No. 3 I can find homes for all of the puppies or kittens.

Fact Even if you do find homes for the offspring, this is one less home for the millions of animals in shelters waiting to be adopted.

Myth No. 4 It’s better to allow your female pet to have at least one litter before spaying.

Fact This is grossly untrue. In fact, the opposite is true. A female dog will have much less chance of developing cancer of the reproductive organs and mammary tissue by spaying her before her first heat. Letting her have even on litter predisposes her to breast, uterine and ovarian cancer.

The chart below represents one unsprayed female’s reproduction possibilities. She and a mate and all of her offspring can produce 2 litters per year, with 2.8 surviving kittens per litter: 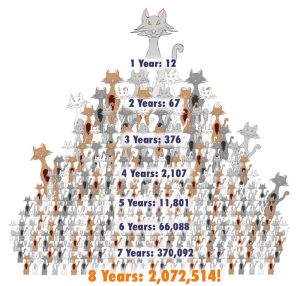 By spaying and neutering just one male and one female cat, more than 2,000 unwanted births can be prevented in just four years – and more than 2 million in 8 years!

According to the ASPCA (American Society for the Prevention of Cruelty to Animals) a staggering 4 million healthy cats and dogs are euthanized in the United States each year. That is nearly 11,000 per day. A cat can produce one to two litters a year of 4 to 6 kittens per litter, and a dog averages one litter of 4 to 6 puppies per year. So in only six years an unaltered female dog and her offspring can produce 67,000 puppies, and in seven years one female cat and her offspring can produce an incredible 370,000 kittens.

Spaying and neutering lowers these numbers by decreasing unwanted litters and thus the number of homeless and abandoned animals.

We understand you mean to be kind when you take your dog along on errands in the car, but you could be risking his or her life.

On a hot summer day the inside of a car heats very quickly. On an 85 degree day, for example, the temperature inside your car – even with the windows slightly opened – will reach 102 degrees in just 10 minutes. In 30 minutes it will go up to 120 degrees. On warmer days it will go even higher.A dog’s normal body temperature is 101.5 to 102.2 degrees Fahrenheit. A dog can withstand a body temperature of 107-108 degrees Fahrenheit for only a very short time before suffering irreparable brain damage – or even death. The closed car interferes with your dog’s normal cooling process, that is evaporation through panting.

IF YOUR DOG IS OVERCOME BY HEAT EXHAUSTION, YOU CAN GIVE IMMEDIATE FIRST AID BY IMMERSING HIM OR HER IN COLD WATER UNTIL BODY TEMPERATURE IS LOWERED.

Thank you for your support!

Once you assign your Kroger Rewards to WAG, then every time you shop at Kroger, WAG will get a cash reward.

Dry Cat Food donations can be left at the Calhoun County Library in Grantsville, WV.